Gothic for the Steam Age 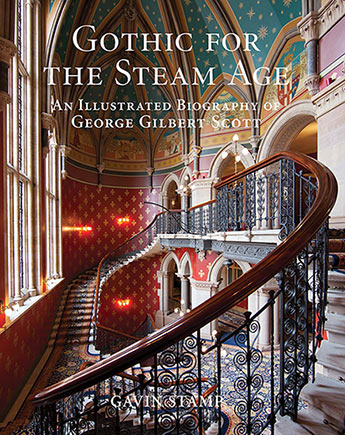 The first in what is a long-overdue illustrated biography of Sir Gilbert Scott, Gavin Stamp has trawled tirelessly through the archives, trying to piece together the life of this great Victorian architect.

George Gilbert Scott was the most prolific and most famous of Victorian architects. For many, however, blinded by prejudice to the merits of Victorian architecture and the Gothic Revival, he was the most notorious. The rehabilitation of his reputation after a century of abuse is symbolised, above all, by the magnificent restoration of one of his best-known buildings (once seriously threatened with demolition), the hotel at St Pancras Station in London. He was the founder of the greatest architectural dynasty in British history, a dynasty which still flourishes in the fourth and fifth generation.

Scott ran the largest architectural office of its time and it produced designs for some seven or eight hundred buildings (estimates vary). Only a limited selection can therefore be illustrated here, but all of his major secular works are represented, whether by old or new photographs, original drawings and prints, along with the best and most significant of his many churches.
More books by this author

GAVIN STAMP is an architectural historian and writer, who for many years was chairman of the Twentieth Century Society. His other books include: Lost Victorian Britain, Britain's Lost Cities andEdwin Lutyens Country Houses (all published by Aurum), as well as: The Memorial to the Missing of the Somme and The Changing Metropolis: Earliest Photographs of London 1839 - 1879.