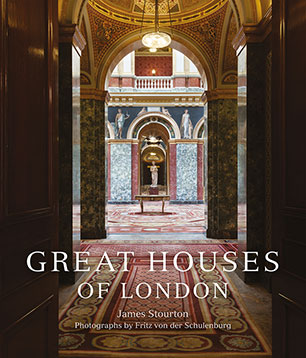 The story of the great houses of London, for the most part disguised behind sober facades, revealing the astonishing riches within.

The great houses of London represent one of the marvels of English architecture and yet they are almost entirely unknown. They are for the most part disguised behind sober facades but their riches within are astonishing.

There are many architectural wonders, among them Robert Adam's 20 St James's Square and William Burges's Tower House. Several - including Bridgewater House with its Raphaels and Titians - have held great art collections.

These are houses that hold extraordinary stories: half the Cabinet resigned after breakfast at Stratford House; and on 4 August 1914, at 9 Carlton House Terrace, then the German Embassy, young duty clerk Harold Nicholson deftly substituted one declaration of war for another.

Great Houses of London opens the door to some of the greatest and grandest houses in the world to tell the stories of their owners and occupants, artists and architects, their restoration, adaptation and change.
More books by this author

JAMES STOURTON is Chairman of Sotheby's UK. He writes regularly for The Times, the Daily Telegraph, The Independent, The Spectator and Apollo. Previous books include Great Smaller Museums of Europe (2003) and Great Collectors of Our Time (2007).

During a photographic career that has spanned over 35 years, FRITZ VON DER SCHULENBURG has achieved international acclaim. His photographs have been published in numerous interior design and architectural magazines, including The World of Interiors, House & Garden and Architectural Digest. He has also published several volumes of his own work. These include: Neoclassicism in the North, The English Garden Room, Romantic Scotland, Empire, and Living by Design.