Learn to animate step by step 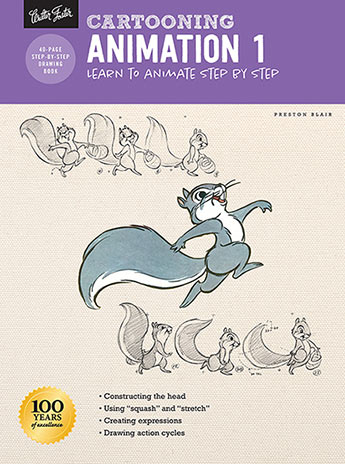 Learn the basics of cartoon animation from acclaimed cartoon animator Preston Blair! Join acclaimed cartoon animator Preston Blair as he explains and demonstrates the magic of cartoon animation. Learn to develop a cartoon character's shape, personality, features, and mannerisms; how to create movements, such as walking, running, skipping, and sneaking; and tips on using lines of action and creating realistic motion. From cartooning basics to more advanced animation techniques, Animation 1 is a welcome introduction for artists ready to bring their drawings to life. Designed for beginners, the How to Draw & Paint series offers an easy-to-follow guide that introduces artists to basic tools and materials and includes simple step-by-step lessons for a variety of projects suitable for the aspiring artist. Animation 1 allows artists to widen the scope of their abilities, demonstrating how to animate a character, from character development to movement and dialogue.
More books by this author More books in this series

Preston Blair (1910-1995) was a native Californian who studied art at the Otis Art Institute, as well as illustration under Pruett Carter at Chouinard Art Institute (now California Institute of the Arts). As a member of the California Watercolor Society and the American Watercolor Society in New York, he exhibited work all over the country. Preston was a fine artist during the early days of full-length feature animation. For the Disney production Fantasia, he designed and animated the hippos in "The Dance of the Hours." He also animated Mickey Mouse in The Sorcerers Apprentice, portions of the classic film Pinocchio, and the famous scene in Bambi when the owl talks about love in his "twitterpated" speech. At MGM, Preston directed Barney Bear short films, and he was well known as the designer and animator of one of Tex Averys epic shorts Red Hot Riding Hood. Preston later moved to Connecticut, where he produced television commercials, educational films, and cartoons, including TheFlintstones. Before he passed away, he worked as an inventor of interactive TV programs, such as teaching reading through animation and virtual reality games featuring full-sized animated opponents.