An interactive guide to drawing anime characters, props, and scenes step by step 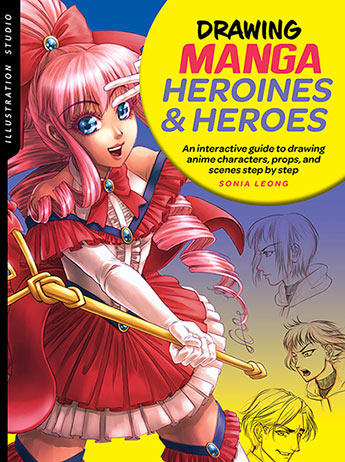 With Drawing Manga Heroines and Heroes (Illustration Studio), anime and manga enthusiasts and artists can learn to draw a range of manga heroes, heroines, and characters.

Learn to draw your favorite manga and anime characters, and create your own, with Drawing Manga Heroines and Heroes (Illustration Studio)! In this exciting extension of the interactive Illustration Studio series, learn how to illustrate a range of manga heroes, heroines, and characters-from male and female warriors and fighters to schoolgirls and boys, knights, angels, cyborgs, interstellar idols, and more.
The Illustration Studio series features interactive exercises, creative prompts, and step-by-step exercises to educate and excite beginning and aspiring artists working in a variety of media and techniques, from manga and anime to illustration done in ink. Drawing Manga Heroines and Heroes (Illustration Studio) teaches aspiring and beginning manga artists the basics for creating a range of popular characters, props and scenes. No matter your skill level, the drawing and colorization tips, loads of techniques, and step-by-step projects are instructive and helpful, while creative prompts and exercises invite personalization and participation inside the pages of the book.. You'll be guided through every step as you not only learn how to draw, but also learn the vernacular and story lines associated with this popular art genre.
More books by this author More books in this series

Sonia Leong is a professional comic artist and illustrator who specializes in anime and manga. Her more than 80 published works comprise graphic novels, magazines, film and television projects, and instructional art books, including Illustration Studio: Beginning Manga and Manga Heroes and Heroines, both from Walter Foster Publishing. Sonia also teaches manga workshops and exhibits her artwork throughout the world. Learn more at www.fyredrake.net.