The Rediscovery and Revival of an American Icon--An Illustrated History 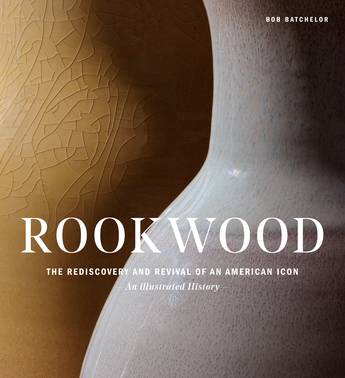 A beautiful full-color history of Rookwood Pottery, a great female-founded and female-owned American art pottery company, telling women's history, art history, and part reportage of the developments over time, as well as an “inside” look into the company and its products today.

Author and historian Bob Batchelor tells the compelling story of this artisanal ceramics company, still operating in the heart of the Ohio River Valley from its founding to present day. Filled with behind-the-scenes artist and creator interviews, stories of Rookwood's avid collectors, as well as never-before-seen images and documents from the company's historic archives, you will see why Rookwood remains a pillar of true craftsmanship.

About Rookwood: The Rookwood Pottery was probably the most famous company making art pottery in the United States in the late nineteenth century into the twentieth century, achieving an international reputation and consistently promoting artistic innovation. Proud that the pottery was "an artists studio, not a factory," Rookwood Pottery is known for its exceptionally fine glazes and successful experimental designs. By assimilating the strengths of myriad aesthetic movements from the American Art Pottery Movement to Art Nouveau and Art Deco, Rookwood Pottery encouraged decorators to try unusual subjects and to explore new techniques. The Rookwood Pottery Company is located in the bustling Over-the-Rhine neighborhood of Cincinnati, Ohio-and it has been for decades. Pioneering artist Maria Longworth-Nichols founded the studio in the Queen City in 1880, building the business and laying the foundation for what Rookwood is today: a world-renowned artisanal ceramics company, operating in the heart of the Ohio River Valley. From New York's Grand Central Station to The Louvre in Paris, contemporary boutique hotels to historic homes, Rookwood has truly made its mark on the world in the past three centuries.

And now, it's embarking on the next chapter. Today, Rookwood continues to build upon its rich heritage, creating the highest-quality pottery and architectural tile in the United States. With a team of just over 70 employees, Rookwood is deeply committed to their mission: cultivating artistic inspiration, giving back to the community, and balancing their rich legacy with forward-thinking momentum-ideas that are central to the Rookwood brand. They take pride in their process, their people and their product, ultimately creating premier pieces with a story-and a one-of-a-kind luxury experience that can only be Rookwood.
More books by this author

Bob Batchelor is the critically-acclaimed, best-selling cultural historian and biographer of The Bourbon King: The Life and Crimes of George Remus, Prohibition's Evil Genius. He has published widely on American history and literature, including books on Stan Lee, Bob Dylan, The Great Gatsby, Mad Men, and John Updike. Bob earned his doctorate in English Literature from the University of South Florida. He teaches in the Media, Journalism & Film department at Miami University (Oxford, Ohio) and lives in Blue Ash, Ohio.