The Complete Book of Calligraphy & Lettering 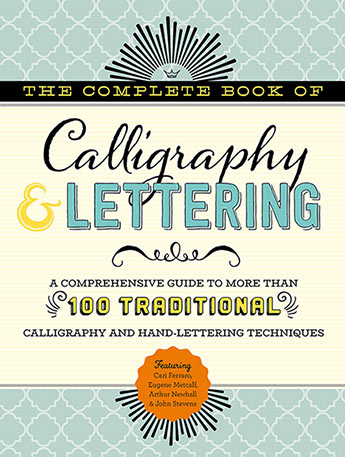 The Complete Book of Calligraphy & Lettering introduces aspiring calligraphers and hand-lettering artists to the core concepts and techniques that comprise the art of traditional calligraphy.

The Complete Book of Calligraphy & Lettering provides expert instruction on the intricacies of traditional lettering techniques, as well as an introduction to contemporary hand-lettering formats. From selecting the appropriate tools, such as pens, nibs, brushes, inks, and papers, to learning optimal hand positioning and understanding the intricacies of lettering angles, heights, spacing, and strokes, The Complete Book of Calligraphy & Lettering will help lettering enthusiasts swiftly master their craft. Step-by-step lessons, practice templates, and a range of stunning alphabets demonstrate the breadth of artistic achievement that comes with practice and dedication. Four professional artists guide you through traditional calligraphy techniques, as well as an introduction to contemporary hand-lettering art forms, such as brush lettering and mixed media, for a well-rounded approach to the craft. Additionally, a short section on Chinese brush lettering and several mixed media lettering projects inspire creativity and demonstrate how calligraphy and lettering can be used in wider artistic contexts and projects. Including practice templates for several featured alphabets in addition to mixed media "bonus" projects designed to inspire artistic creativity, The Complete Book of Calligraphy & Lettering will inspire lettering enthusiasts of all skill levels to strengthen their existing skills and delve into new, lesser-known variations of the trend.
More books by this author More books in this series

Cari Ferraro has been practicing calligraphy for over three decades. She has studied with many of the finest calligraphers teaching today, and taught broad pen calligraphy to children and adults. Her design business, Prose and Letters, has fulfilled calligraphy commissions for weddings, corporations, institutions, and individuals since 1982. She also maintains a website as an online portfolio and catalog of her cards, prints, books, and wedding certificates. Her calligraphic manuscript books are collected by individuals and libraries around the country. Her work has been featured in the magazines Victoria, Letter Arts Review, and Somerset Studio; the Calligraphers Engagement Calendar; and several wedding books. Cari makes her home in Northern California.The late Eugene Metcalfs natural talent in various art fields established him as a top calligrapher and designer. With a specialty in lettering design, Metcalf created logos for a variety of commercial applications. Of his more than 30 years in the commercial art industry, almost half of them were spent as art director and top designer for major outdoor advertising companies in the Los Angeles area.The late Arthur Newhall had a unique and varied background in the lettering and graphic design fields. His work included type designing, theater lobby displays, movie titles, sign painting, advertising art, lettering for reproduction, and art for screen printing. He also worked as art director for an advertising agency. All of these disciplines added to the refinement of his calligraphy skills. A stickler for precision and style, Newhall was always prepared to help and guide both the novice and professional. He was one of the innovators of one of the most spectacular letter styles ever created—the Cartoon Casual—as well as a Modern Script of the 40s and 50s.John Stevens is an internationally known calligrapher, designer, and lettering artist with 30 years of experience in the field. An art major and former musician, he found his true calling when he was introduced to lettering while apprenticing in a sign shop. Johns prestigious client list includes Rolling Stone, Time, Readers Digest, and Newsweek magazines; Pepsi; Atlantic Records; HBO; Lucasfilms; IBM; Disney; and many others.