The world's most iconic cultural spaces 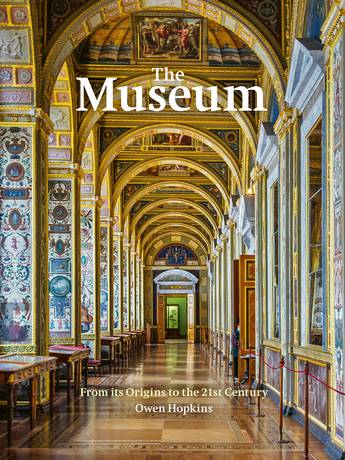 Packed with stunning imagery and featuring the world's most celebrated cultural institutions, architectural historian and museum curator Owen Hopkins looks at the fascinating history of the museum.

Visited by millions around the world every year, discover the untold story of the museum, one of mankind's most essential creations. Using examples of the greatest cultural institutions to shape the narrative, this book outlines the history of the museum movement, tracking the evolution from princely collections in Europe and the Enlightenment's classically inspired temples of curiosities, via the public museums of the late nineteenth century, on to today's global era of iconic buildings designed by the world's leading architects. Over the course of five chapters filled with stunning imagery that highlights the beauty of these venerated buildings, the origins of key institutions are revealed, including:

Also outlined are the motivations of the architects, curators and patrons who have shaped how we experience the modern museum, a cast that includes names such as King George II, Napoleon, Henry Clay Frick, Peggy Guggenheim, Andrew Carnegie, Alfred Barr, Frank Lloyd Wright, Le Courbusier, Frank Gehry, Richard Rogers, Nicholas Serota and Zaha Hadid. By examining how these venues became intrinsic to our shared cultural experience, analysing the changing roles they play in society and questioning what the future holds in a digital age, this book is for anyone who has stood in awe at the spectacle of a museum.
More books by this author

Owen Hopkins is an architectural historian and a senior curator at London's Sir John Soane's Museum, having previously worked as architecture programme curator at the Royal Academy of Art. He has written five books, including Reading Architecture: A Visual Lexicon, which has been translated into 12 languages, and Lost Futures, an examination of the disappearing architecture of post-war Britain. He has commented widely on architecture for Independent, Dezeen, Icon, The Architectural Review, topos, The Architects' Journal and Building Design, and has appeared on BBC Newsnight, BBC Radio and Monocle Radio. Currently based in London, he is a guest critic at architecture schools and has lectured at Yale School of Architecture and the University of Oxford.