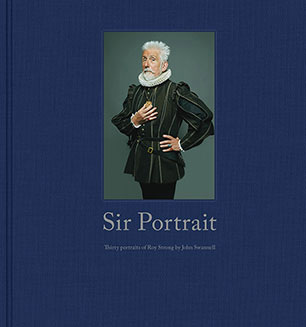 Sir Portrait is an enchanting book, a work of playful connoisseurship, and a celebration of a life in portraits and dress

How does the former Director of the nation's greatest collection of portraits celebrate his 80th birthday? The distinguished photographer John Swannell and Roy Strong have devised a series of thirty portraits that transport Roy through time, inventing and reinventing him as an array of historical characters. With a sharp eye for period style and dress, and flashes of a tongue-in-cheek wit, Roy and John spent five years on a project in which he takes on the characters of Henry VIII, Toulouse Lautrec, Rasputin, President Lincoln and many more. The results, together with Roy's diary relating the stories behind the sittings, make a remarkable photographic essay of a man rightly dubbed 'Sir Portrait'. Sir Portrait is an enchanting book, a work of playful connoisseurship, and a celebration of a life in portraits
More books by this author

SIR ROY STRONG is a well-known historian and garden writer, lecturer, critic and columnist and a regular contributor to television and radio programmes. He was Director of the National Portrait Gallery from 1967 to 1973 and of the Victoria and Albert Museum from 1974 to 1987. In 1980 he was awarded the prestigious Shakespeare Prize by the FVS Foundation of Hamburg in recognition of his contribution to the arts in the UK. He has published a number of highly acclaimed books. Sir Roy lives in Hereford, where, with his late wife, Julia Trevelyan Oman, who died in 2003, he designed one of England's largest post-war formal gardens.