Learn the techniques for drawing and animating cartoon characters 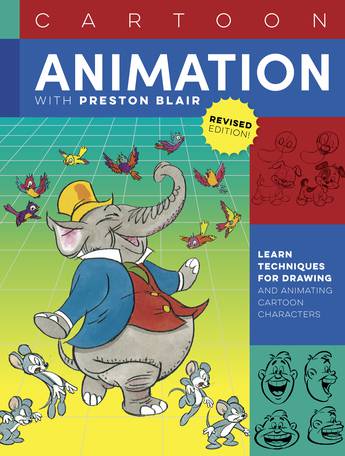 Learn from a master how to bring your cartoons to life through animated movement with Cartoon Animation with Preston Blair.

In Cartoon Animation with Preston Blair, acclaimed cartoon animator Preston Blair shares his vast practical knowledge to explain and demonstrate the many techniques of cartoon animation. By following his lessons, you can make any character-person, animal, or object-come to life through animated movement! Animation is the process of drawing a character in successive positions to create lifelike movement. Animators bring life to their drawings, making the viewer believe that the drawings actually think and have feelings. While animators must first know how to draw, the animation process involves much more than just good drawing skills. This book teaches all the other knowledge and skills animators must have:

• How to construct original cartoon characters, developing a character's shape, personality, features, and mannerisms
• How to create movements such as running, walking, dancing, posing, skipping, strutting, and more
• The finer points of animating a character, including creating key character poses and in-betweens
• All about dialogue, how to create realistic mouth and body movements, and facial expressions while the character is speaking; with helpful diagrams showing mouth positions, along with a thorough explanation of how sounds are made using the throat, tongue, teeth, and lips
• A variety of technical topics, including background layouts, cartoon storyboards, and the synchronisation of camera, background, characters, sound, and music

Full of expert advice from animation pioneer Preston Blair, as well as helpful drawings and diagrams, Cartoon Animation with Preston Blair is a book no animation enthusiast should be without.

The Collector's Series offers a broad range of projects across a variety of mediums and genres, such as drawing, oil, acrylic, watercolour, cartooning, calligraphy, and others. This series is suitable for beginning to intermediate artists, and each title features in-depth instruction about how to work with the tools of the trade, master techniques, and use newfound skills in practical application.
More books by this author More books in this series

Preston Blair (1910-1995) was a native Californian who studied art at the Otis Art Institute, as well as illustration under Pruett Carter at Chouinard Art Institute (now California Institute of the Arts). As a member of the California Watercolor Society and the American Watercolor Society in New York, he exhibited work all over the country. Preston was a fine artist during the early days of full-length feature animation. For the Disney production Fantasia, he designed and animated the hippos in "The Dance of the Hours." He also animated Mickey Mouse in The Sorcerers Apprentice, portions of the classic film Pinocchio, and the famous scene in Bambi when the owl talks about love in his "twitterpated" speech. At MGM, Preston directed Barney Bear short films, and he was well known as the designer and animator of one of Tex Avery's epic shorts Red Hot Riding Hood. Preston later moved to Connecticut, where he produced television commercials, educational films, and cartoons, including The Flintstones. Before he passed away, he worked as an inventor of interactive TV programs, such as teaching reading through animation and virtual reality games featuring full-sized animated opponents.