Tales from my twelve-year-old life 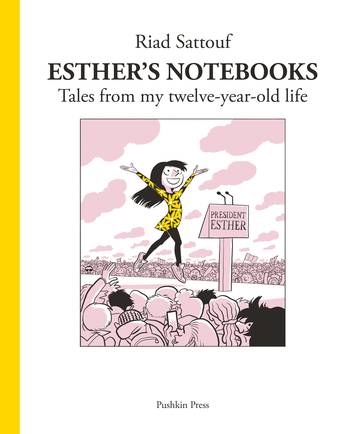 Download cover
Availability: Temporarily unavailable from this website, please try another retailer
Every week, the comic book artist Riad Sattouf has a chat with his friend's daughter, Esther. She tells him about her life, about school, her friends, her hopes, dreams and fears, and then he works it up into a comic strip.

This book consists of 52 of those strips, telling between them the story of a year in the life of this sharp, spirited and hilarious child. The result is a moving, insightful and utterly addictive glimpse into the real lives of children growing up in today's world.
More books by this author

Riad Sattouf is a bestselling cartoonist and filmmaker who grew up in Syria and Libya and now lives in Paris. His autobiographical series The Arab of the Future has sold more than a million copies in France alone, won multiple prizes and been translated into sixteen languages. The Esther's Notebooks series has also sold nearly 700,000 copies in France, been adapted for a popular animated TV series, and is being translated into 8 languages. Riad was recently selected to become a member of The Order of Arts and Letters, one of France's highest honours.