An Incredible Race of People 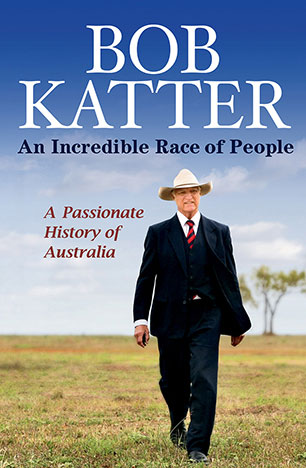 A must read for all Australians who care about this country's past, as well as its future.

In 1988, Queensland politician Bob Katter Jnr was, at short notice, called upon to officiate and entertain the King and Queen of Spain. At dinner the three discussed Australian white settlement and our forebears, prompting Queen Sofia to remark, 'What an incredible race of people you are.'

Today Bob Katter Jnr is one of the country's best known federal politicians. He's forthright, outspoken and has achieved extraordinary notoriety as a politician of real conviction across an astonishing breadth of issues that defy all attempts at easy categorisation. Bob Katter is a complex man, and he's passionate about what made this country great, and what is needed to ensure that it remains so as we negotiate our way further into the twenty-first century.

An Incredible Race of People is a highly personal and at times challenging investigation of our politics and industry over many decades: heroes are applauded and pretenders dismissed, urgent issues are identified and solutions tabled. In the tradition of the greatest statesmen, Bob Katter Jnr urges us to consider, discuss, and act to ensure Australia's future remains bright.
More books by this author

Bob Katter Jr has been the Federal Member for Kennedy in QLD since 1993, following a highly successful career in State politics where he held four Ministerial positions. Originally a National Party member for most of his Parliamentary career, due to his disenchantment with economic rationality that he felt the National Party was adopting, Bob chose to stand as an Independent Member in the 2001 Federal election and he won in a landslide.