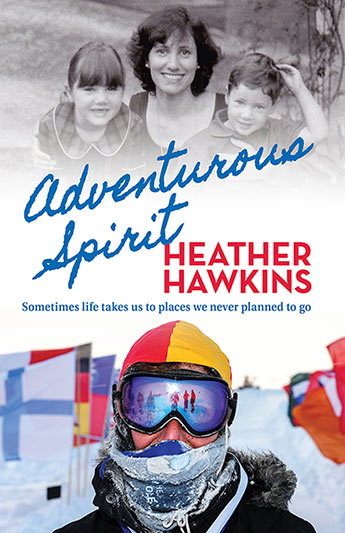 Sometimes life takes us to places we never planned to go.

An incredible journey from an ordinary life to one of extraordinary adventure.

At 41 - with two teenagers and a contentedly unadventurous life - Heather Hawkins made a doctor's appointment. Diagnosed with stage one ovarian cancer, within nine days she had surgery to remove an 18cm tumour, and a full hysterectomy. Instead of chemotherapy, she chose a non-invasive surveillance treatment.
The experience reignited Heather's adventurous and invincible spirit. At 47 she pulled on an old pair of shorts and runners and struggled to the end of a 4km mothers' day fun run with her kids. Five years later she has 17 marathons and 3 ultra marathons under her belt, including the North Pole Marathon and the extraordinary World Marathon Challenge - a gruelling seven marathons in seven days on seven continents. She topped that off by trekking 1700km in the thin air of Nepal's Great Himalaya Trail.
And she's only just getting started ...

'Heather's courage is immeasurable. She has unstoppable conviction and an energy that inspires and amazes me' - Robert de Castella - AO MBE, Australian Former World champion Marathon Runner
More books by this author

Heather Hawkins is a woman of two lives - from an everyday mother battling Ovarian Cancer with an unknown future to conquering the world of extreme marathons and adventures. Heather's is not just another remarkable and inspiring story, but one that will take you on a personal journey around the world ...across the polar poles, traversing the roof top of the Himalayas as Heather takes her new life to the extreme, and living it to the full.
Following her life changing cancer diagnosis Heather competed in her first running event in 2012 at 46. Now 51 Heather has competed in six half marathons, eighteen full marathons, three of the world's most gruelling ultra-marathons and the world's longest trek, the Great Himalaya Trail.
In October 2017 she will revisit the magnificent Himalayas and just four days later compete in the Volcano Marathon in the Atacama Desert in Chile.

In 2018 Heather will undertake her most formidable challenge yet with those details to be announced in January 2018.

Heather is an ambassador for ANZGOG, CanToo, The Indigenous Marathon Project and World Expeditions and a regular speaker for charities, women's events, sporting conferences and corporate and community groups. She is tireless in her quest to raise awareness and money for cancer research and to inspire people to find their own "Adventurous Spirit."