The Story of Life

A First Book about Evolution 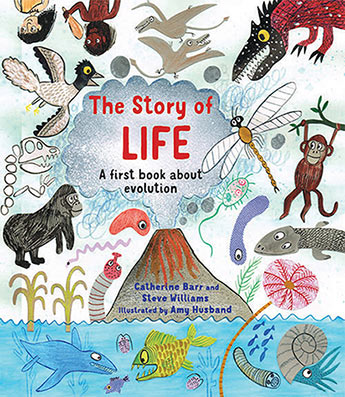 At first, nothing lived on Earth. It was a noisy, hot, scary place. Choking gas exploded from volcanoes and oceans of lava bubbled around the globe...

Then in the deep, dark ocean, something amazing happened.

The authors explain how the first living cell was created, and how the cells multiply and create jellyfish and worms, and then fish with bendy necks, which drag themselves out of the water into swampy forests. They tell the story of the biggest creatures that have ever walked on land - the dinosaurs. Long after that, hairy creatures who have babies, not eggs, take over, stand on two legs and spread around the world, some of them living through cataclysmic events such as ice ages and volcanic eruptions. Everyone living today is related to these survivors.

With delightful illustrations including lots of detail and humour, all carefully researched and checked, this book shows the development of life on Earth in a truly accessible and simple way.
More books by this author

AMY HUSBAND studied Graphic Art at Liverpool School of Art. Her first picture book, Dear Miss, was winner of the Cambridgeshire Children's Picture Book Award in 2010, and she also wrote and illustrated Dear Santa, in the same series. The Story of Life is her first book for Frances Lincoln.

CATHERINE BARR studied Ecology at Leeds University and trained as a journalist. She worked at Greenpeace International for seven years as a wildlife and forestry campaigner and has a long-running interest in environmental issues. While working as an editor at the Natural History Museum, she researched and wrote two major summer exhibitions: Dinosaurs of the Gobi Desert and Myths and Monsters. She is now a partner in communications company bwa design.

STEVE WILLIAMS is a biologist with a degree in Marine Biology and Applied Zoology from the University of Wales. His lifelong love of wildlife was further inspired by eight years at sea, after which he trained as a teacher, and now teaches science in a rural comprehensive school in Wales. He is a beekeeper and lives with his wife and two daughters.