ABC Baby Signs (ABC for Me)

Learn baby sign language while you practice your ABCs! 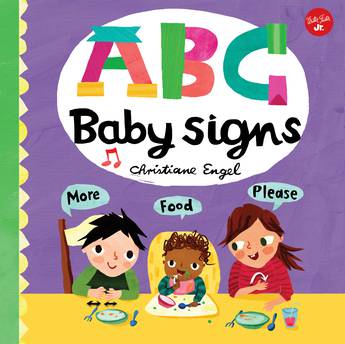 ABC Baby Signs features twenty-six of the most common, simple baby signs, such as "all done," "more," and "please," to teach babies and toddlers basic ways to communicate with their hands before they can verbalise their needs.

This title features one sign per letter of the alphabet, a cute rhyming story, adorable illustrations, and sweet, illustrated demonstrations. Kids and their parents will love learning baby signs together!
More books by this author More books in this series

Christiane Engel is an award-winning illustrator and author. Her work can be found in a huge variety of kids' books all over the world, including a kids' bible and a children's atlas as well as Walter Foster Jr.'s ABC Love and ABC Yoga. Her instantly recognizable children's characters appeared in an award-winning ad campaign in the UK and she works with the Surrey County Council to create advertising and educational material for families. She has also created illustrations for animated programs for clients including the BBC. Christiane lives by the sea in southeast England with her little family. Learn more at chengel.myportfolio.com.