ABC Yoga (ABC for Me) 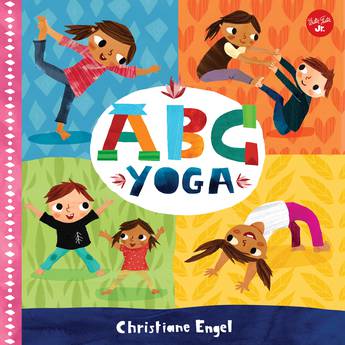 ABC Yoga pairs colorful illustrations of children and animals practicing yoga poses along with playful rhymes to explain each movement.

Pairing simplified yoga poses with alphabetized animals and objects, ABC Yoga features colorful illustrations of children and animals practicing yoga along with playful rhymes to explain each movement. Crawl like a crocodile, stretch like a fox, and hop like a grasshopper, discovering basic yoga poses as you learn the alphabet. A fun family read, this interactive book is perfect for teaching toddlers their ABCs, as well as introducing them to familiar animals and basic, simplified yoga poses that promote health and well-being. Each letter of the alphabet is paired with an engaging illustration mimicking the various animals' natural movements. Clever rhymes explain how toddlers (and their parents!) can copy the poses, each of which encourage movement, physical fitness, and mental health. The 26 yoga poses, one for each letter of the alphabet, are renamed for easy recognition, while an index at the end of the book identifies the correct name for each asana (yoga pose) for the adults. Among them:

The charming pictures and playful rhymes in ABC Yoga encourage children and their parents to get up and move, promoting physical activity, learning, and togetherness. With endearing illustrations and mindful concepts, the ABC for Me series pairs each letter of the alphabet with words that promote big dreams and healthy living. Other books in this series include:

Christiane Engel is an award-winning illustrator and author. Her work can be found in a huge variety of kids' books all over the world, including a kids' bible and a children's atlas as well as Walter Foster Jr.'s ABC Love and ABC Yoga. Her instantly recognizable children's characters appeared in an award-winning ad campaign in the UK and she works with the Surrey County Council to create advertising and educational material for families. She has also created illustrations for animated programs for clients including the BBC. Christiane lives by the sea in southeast England with her little family. Learn more at chengel.myportfolio.com.