Notes, drawings, and observations from prehistory 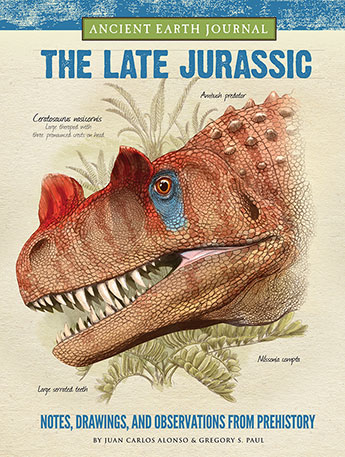 Written and illustrated in the style of a naturalist's notebook, Ancient Earth Journal: The Late Jurassic shows readers what it would be like to stand alongside prehistoric creatures and dinosaurs.

Through detailed illustrations and descriptive narrative, readers will experience a thrilling, thoroughly enjoyable ride through the most popular time period of prehistory.

What would it be like to see a living, breathing dinosaur? Following in the footsteps of Ancient Earth Journal: The Early Cretaceous, this next installment, The Late Jurassic, will take readers further back in time to a period when giants ruled the land and early mammals began to secure their place alongside the dinosaurs. The Late Jurassic period was home to many species of our favorite dinosaurs, such as Apatosaurus (or Brontosaurus), Allosaurus, and Stegosaurus, to name a few. The Late Jurassic includes the latest paleontological findings to build an accurate depiction of the dinosaurs, environment, and wildlife of the period. Due to the abundance of fossils available for both plants and animals of this period, the book paints a vivid, realistic picture of the flora and fauna of the time, with more emphasis on hunting and defensive tactics, as well as early mammals and their role in the planet's evolution, for a thrilling, thoroughly enjoyable ride through the most popular time period of prehistory. Written and illustrated in the style of a naturalist's notebook, the reader is given a first-hand account of what it would be like to stand alongside some of the largest creatures to ever walk the earth.
More books by this author More books in this series

Juan Carlos Alonso is a Cuban American graphic designer, creative director, and illustrator. He has over 30 years experience in the graphic design/illustration field. In 1992, he founded Alonso & Company, a creative boutique specializing in branding, design, and advertising. He has been working with clients of all sizes from Fortune 500 to local businesses and has forged strong relationships with companies including the NBA franchise The Miami Heat, Bacardi Rum, Ryder System, Pitney Bowes, and Capitol Records. Alonso & Company has attained international acclaim for work in advertising and graphic design. His passion for nature has taken him around the world from Australia to the Galapagos Islands to study animals. Along with his work in the graphic arts, he is also an accomplished wildlife sculptor focusing mostly on prehistoric animals.

Gregory S. Paul is an American freelance researcher, author, and illustrator who works in paleontology. He is best known for his work and research on theropod dinosaurs and his detailed illustrations, both live and skeletal. Professionally investigating and restoring dinosaurs for three decades, Paul received an on-screen credit as a dinosaur specialist on Jurassic Park and Discovery Channel's When Dinosaurs Roamed America and Dinosaur Planet. He is the author and illustrator of Predatory Dinosaurs of the World (1988), The Complete Illustrated Guide to Dinosaur Skeletons (1996), Dinosaurs of the Air (2001), The Princeton Field Guide To Dinosaurs (2010), Gregory S. Paul's Dinosaur Coffee Table Book (2010), and editor of The Scientific American Book of Dinosaurs (2000).