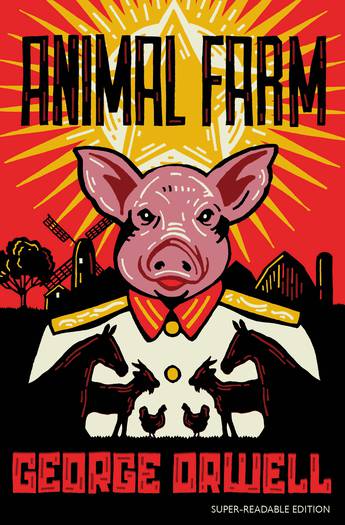 Orwell's powerful, unnerving and timeless allegory of oppression and rebellion, brought to life in a dyslexia-friendly, unabridged edition in a format accessible to all readers.

When the lazy and drunken Mr Jones of Manor Farm forgets to feed his livestock the down-trodden and over-worked animals unite to take back their freedom. Led by the pigs Napoleon and Snowball they imagine this rebellion is the start of a life of prosperity and plenty. But as a cunning, brutal elite amongst them begins to take control something new and unexpected emerges ...
More books by this author

George Orwell was born Eric Arthur Blair, in India in 1903. He was educated in England and spent the early years of his writing career in Paris. He became known as an essayist with the likes of Down and Out in London and Paris, before his first novel was published in 1934. Orwell was a respected journalist and critic, working for various magazines and the BBC, before writing his bestselling novella Animal Farm in 1945. It made Orwell's name and ensured his literary legacy. He died in 1950.