Notes, drawings, and observations about animals that live on land 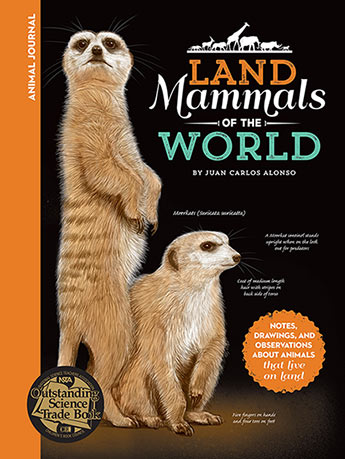 With this naturalist's notebook in hand, young zoologists can explore the world's most fascinating mammals, up close and personal.

With this naturalist's notebook in hand, young zoologists can explore the world's most fascinating mammals, up close and personal.Land Mammals of the World guides readers on an exploration of the world's most fascinating mammals, from the terrifying grizzly of North America to the marsupials of Australia. Naturalists in the making can imagine themselves immersed in exotic habitats both near and far, from the rainforests of the Amazon to the grassy plains of Africa. This naturalist's notebook gives budding biologists the opportunity to explore new and unfamiliar species, as well as learn the subtle differences amongst the subspecies of their favorite animals. From great apes to the swift cheetah and the hulking rhinoceros, adventure awaits as you travel across the globe to catch a glimpse of the world's most wondrous mammals.
More books by this author More books in this series

Juan Carlos Alonso is a Cuban American graphic designer, creative director, and illustrator. He has over 30 years experience in the graphic design/illustration field. In 1992, he founded Alonso & Company, a creative boutique specialising in branding, design, and advertising. The company has attained international acclaim for work in advertising and graphic design. His passion for nature has taken him around the world from Australia to the Galapagos Islands to study animals. Along with his work in the graphic arts, he is also an accomplished wildlife sculptor focusing mostly on prehistoric animals.