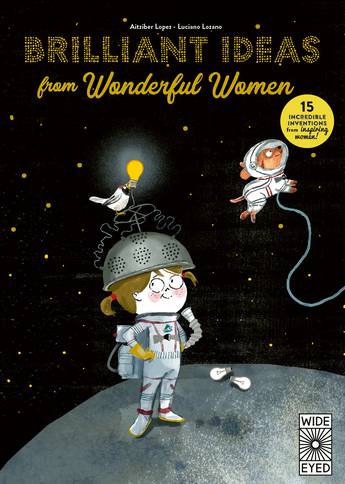 What do Monopoly, wifi and lifeboats have in common? They were all invented by women!

Discover the story behind some of the 20th century's key inventions in this fun and informative treasury of trailblazing women, who each made a unique contribution to the history of science and technology. From lifeboat-inventor, Maria Beasley, to the grandmother of the ebook, Angela Ruiz Robles, each of the brilliant women in this book achieved their goal of leaving the world a better place than they found it.

An inspiring anthology for the next generation of super scientists.
More books by this author

Aitziber Lopez grew up in Gipuzkoa, Spain. From a child, her ambition was to become a scientist, and she later graduated in Chemistry before starting her PhD research. This is her first book for children.
LUCIANO LOZANO studied an MA Illustration at EINA, and now lives and works in Barcelona. His book Operation Alphabet won the Best Foreign Book Award Junceda from the Professional Association of Illustrators of Catalonia (APIC).