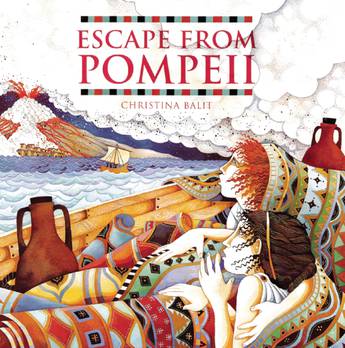 Travel back in time to the days of the Roman Empire and join Tranio, the son of an actor, and his friend Livia, the baker's daughter, in witnessing the eruption of Mount Vesuvius in AD79.

The eruption of Mount Vesuvius in AD 79 meant death for most of the Roman citizens living in Pompeii. But some people must have survived, and Christina Balit has used this as the starting-point for her story. It tells of Tranio, an actor's son, and his friend Livia, the baker's daughter, who witness the destruction of their beloved city.
More books by this author

Christina Balit was born in Manchester but grew up in the Middle East. She studied at Chelsea School of Art and the Royal College of Art, and also attended Morley Theatre School and Questors Theatre School. She has exhibited widely and is also a playwright. Her books have won several nominations, commendations and a shortlist place for the Kate Greenway Medal. Kingdom of the Sun (written by Jaqueline Mitton), won the 2002 English Association Award for non-fiction.To learn more about Christina Balit click here