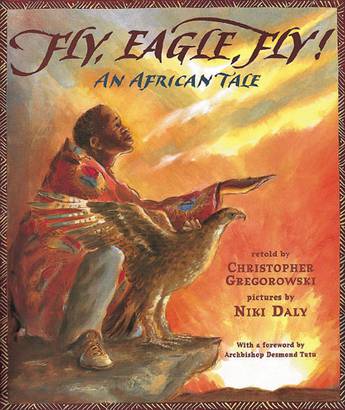 Download cover
Availability: Not available to order from this website, please try another retailer
After a stormy night, a farmer searching for his lost calf finds a baby eagle that has been blown out of its nest. He takes it home and raises it with his chickens. But when his friend comes to visit one day, he tells the farmer that an eagle should be flying high in the sky, not scrabbling on the ground for grain. How the farmer's friend proves that the bird is an eagle and destined to fly to the sun is lyrically retold by Christopher Gregorowski. Niki Daly's bright water colour illustrations breath life into this powerful and uplifting tale.
More books by this author

Christopher Gregorowski worked for many years among the Xhosa people in Transkei, South Africa, as an Anglican priest. There he discovered the story of Fly, Eagle, Fly in the biography of Aggrey of Africa, who visited West and Southern Africa in the 1920s from his teaching post in North America. He decided to rewrite the story for his terminally ill daughter, Rosalind. Christopher is Bishop of Table Bay in South Africa. Niki Daly has won many awards for his exuberant work. His groundbreaking Not So fast Songololo (1986), winner of a U.S Parent's Choice Award, paved the way for post-apartheid South African children's books. Since then, he has been published across the globe and has visited and presented talks in several countries. Among his many Frances Lincoln books, Once Upon a Time was an Honor Winner in the US Children's Africana Book Awards of 2004. Jamela's Dress - first in the Jamela series - was another milestone book, chosen by the ALA as a Notable Children's Book and by Booklist as one of the Top 10 African American Picture Books of 2000, and winning both the Children's Literature Choice Award and the Parent's Choice Silver Award. Niki lives with his wife, the illustrator Jude Daly, in Mowbray, a bustling Cape Town suburb.