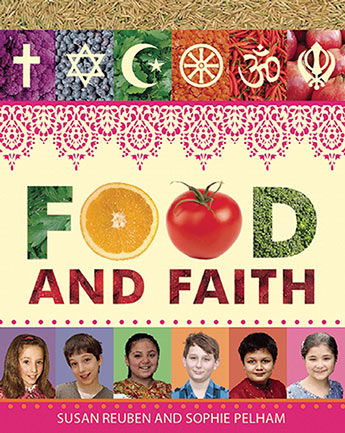 Download cover
Food has always been central to religious practice. From fasting at Ramadan to feasting at Diwali, from the laws of kashrut to the taking of communion, a great deal can be learned about a religion through an understanding of its link with food. Six children from six religions tell their stories through words and photographs. The text is in the first person with each child speaking directly to the reader, making an engaging and visually appealing introduction to this important aspect of religion. The book covers six major religions: Judaism, Islam, Sikhism, Hinduism, Christianity and Buddhism and looks at celebrations, rules, fasting, and food and drink in rituals. Also included are authentic recipes for pancakes, honey cake, pakoras, coconut barfi and puris. All the children featured are from the respective religions and cultural background. The book has been developed with the help of expert consultants from each religion.
More books by this author

SOPHIE PELHAM has been a graphic designer since 1992. A graduate of St Martins School of Art, she became a Senior Designer at Frances Lincoln Ltd. Since 2000 she has been working as a freelance designer and paper engineer, and in 2006 she set up Baobab Editorial and Design with Susan Reuben. She is also co-author of the innovative pop-up book Counting Creatures, published by Simon & Schuster both here and in the US. SUSAN REUBEN has been an editor since 1997. A Cambridge University graduate, she was Commissioning Editor at Frances Lincoln, then Senior Publisher at Egmont books before starting Baobab Editorial and Design with Sophie Pelham. She is co-editor of the Ultimate Book Guide series, the first of which won a Blue Peter Book Award. Susan also works as a ghostwriter and copywriter.