Grandpa Bert And The Ghost Snatchers 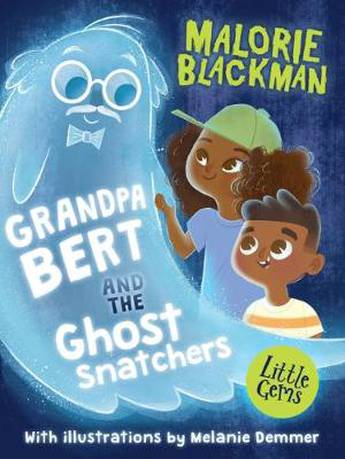 A pleasingly absurd caper where kids outwit crooks, ghost are let out of the bag and grandparents refuse to behave from beloved author Malorie Blackman.

Grandma Gertie is rather strange with her big square glasses and a talking parrot on her hat. Anna and Kasper don't know what to make of her. But Grandma's got a secret… Grandpa Bert is a ghost and he's travelled all the way from Barbados squished inside her handbag! Even worse, they're being followed and Grandpa Bert could be in very grave danger... Can Anna and Kasper help their Grandparents before it's too late?
A hilarious family adventure filled with spooks and thrills.
More books by this author More books in this series

Malorie Blackman was the eighth UK Children’s Laureate. She has twice won the Young Telegraph Award and the W. H. Smith Book Award and has been on the shortlist for the Carnegie Medal. She has written over 50 books, including the awardwinning Noughts and Crosses trilogy. She was awarded the OBE in 2008. She lives in Kent.