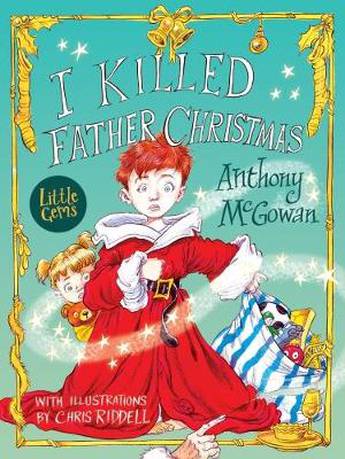 A delightfully witty and tender-hearted Christmas story like none other

Jo-Jo’s mum and dad are arguing again - but this time it’s on Christmas Eve and Jo-Jo’s convinced it’s all his fault. He’s been spoiled, selfish and greedy - and his badness has actually killed Father Christmas. To make amends, Jo-Jo decides that he must be Father Christmas - and so he fills sacks with his old toys and puts on Mum’s long red coat. But then a magical encounter with the real Father Christmas shows Jo-Jo that the true message of Christmas is the giving of love, not of gifts.
More books by this author

Anthony McGowan published his first novel for teenagers, Hellbent, in 2005. It was described by The Times as a ‘brilliantly nauseating thriller.’ His other books include The Knife that Killed Me which was adapted into a film. He lives in London.
Chris Riddell is an award-winning author, illustrator and political cartoonist. He was appointed the UK Children’s Laureate in 2015. Alongside his collaborative work with Paul, Neil Gaiman and others, Chris also writes and illustrates the Ottoline and Goth Girl series.