If I Were King 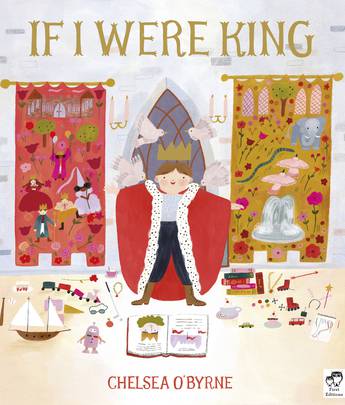 Thomas is fed up of spending so much time with his annoying family. But after a night of particularly strong wishing, he wakes up a king and can do anything he wants! But life is not quite as he expected. If I Were King is a heartwarming story about the power of imagination and the even greater power of home.

A picture book about the importance of home and family from the fantastic illustrator Chelsea O'Byrne. Thomas is fed up with his annoying family. He has been stuck inside with them for ages and he can't even escape into his books without his annoying little brother distracting him.

'If I were a king, I would be in charge! No more eggs and toast for breakfast, I'd eat CAKE! I would read books all day long, and wear a glittering gold crown that I'd never take off.'

But after a night of particularly strong wishing, he wakes up a king and can do anything he wants! Living in the castle are all the other children who had the same wish. Things are fun at first but, even though he is allowed cake for breakfast, it doesn't seem as fun as if he could share it with his naughty little brother.

This is a heartwarming story about the power of imagination and the even greater power of home.
More books by this author

Chelsea O'Byrne is an illustrator and art instructor based in Vancouver BC. She graduated from Emily Carr University in 2016 with a BFA in illustration and now works as an art teacher and freelance illustrator. She runs summer schools for children and test drives a new picture book on her class every day of the week.