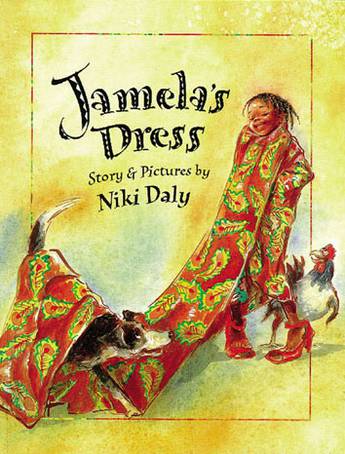 Download cover
Mama is very pleased with the dress material she has bought for Thelma's wedding. Jamela can't resist wrapping the material around her and dancing down the road, proud as a peacock, to show Thelma her beautiful dress! When things go wrong, Mama is very sad indeed, but there's a happy ending just in time for Thelma's wedding day - and guess who has the biggest smile...Kwela Jamela, African Queen, that's who!
More books by this author

Niki Daly has won many awards for his exuberant work. His groundbreaking Not So fast Songololo (1986), winner of a U.S Parent's Choice Award, paved the way for post-apartheid South African children's books. Since then, he has been published across the globe and has visited and presented talks in several countries. Among his many Frances Lincoln books, Once Upon a Time was an Honor Winner in the US Children's Africana Book Awards of 2004. Jamela's Dress - first in the Jamela series - was another milestone book, chosen by the ALA as a Notable Children's Book and by Booklist as one of the Top 10 African American Picture Books of 2000, and winning both the Children's Literature Choice Award and the Parent's Choice Silver Award. Niki lives with his wife, the illustrator Jude Daly, in Mowbray, a bustling Cape Town suburb.