T. rex and Other Prehistoric Predators 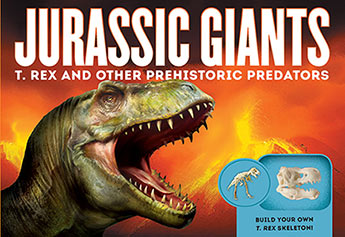 Learn all about the terrible T. rex and then build your own T. rex skeleton with Jurassic Giants.

T. rex comes to life like never before with Jurassic Giants, jam-packed with fun facts, incredible graphics, and cool statistics about the biggest and baddest creatures to ever live. With a detailed, 15-piece, 6" tall model of a T. rex included in the kit, kids can assemble and enjoy a Jurassic giant of their own!

Jurassic Giants gives you an up-close and personal look at T. rex - and its favorite meals. Fierce predators, epic battles, enormous teeth—life in the Mesozoic Era was really hard ... unless, of course, you happened to be a Tyrannosaurus rex! With its powerful jaws and its keen sense of smell, this King of the Cretaceous had no problem tracking down, killing, and eating its prey.

Tyrannosaurus rex may have reigned supreme, but there were lots of other predators to worry about: Giganotosaurus, Spinosaurus, Allosaurus, and Utahraptor to name a few.

How did leaf eaters survive in a world full of carnivores? What caused the dinosaurs to go extinct? And where can you see a T. rex skeleton for yourself? Find the answers to these questions and more, inside. After learning tons of awesome facts, kids will get a thrill out of creating their very own terrible T. rex skeleton.
More books by this author More books in this series