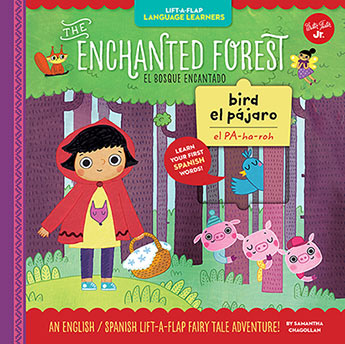 Kids will laugh and learn as they take a bilingual lift-a-flap journey with some of their favorite fairy tale characters.

Kids learn some Spanish with this lift-a-flap fairy tale adventure!Inspire kids to laugh and learn as they take a bilingual lift-a-flap journey with some of their favorite fairy tale characters. Featuring a fun mashup of familiar fairy tales, including Goldilocks and the Three Bears, the Three Little Pigs, and Little Red Riding Hood, favorite stories are intertwined to create a new, bilingual adventure. Hidden within each page are flaps with common English words that lift to reveal their Spanish translations. Parents will love this clever fairy tale lift-a-flap adventure that introduces children to their first Spanish words.
More books by this author More books in this series

Samantha Chagollan is an award-winning author and editor of a variety of children's and arts and crafts books. A native Southern Californian, Samantha grew up with a passion for telling and writing stories. Through the family's art store in Huntington Beach, California, she taught arts and crafts to both children and adults for five years. She went on to earn a degree in literature from Humboldt State University in Arcata, California, where she focused her studies on multicultural literature and the Spanish language. After working for several publishers in the area, Samantha is currently working as a freelance editor and writer and is probably crafting a new story at this very moment.Evgenia Golubeva is an illustrator and writer based in Stratford-upon-Avon, United Kingdom. She studied at the University of Cinema and Television in Saint Petersburg and the French animation school La Poudriere. Her first book, Mirror Spook, was published in Russia in 2012. She has also illustrated in magazines and educational books for children and writes for preschoolers' television shows. Evgenia uses a variety of materials in her illustrations, including inks, watercolors, and pencils, as well as working digitally. Learn more at evgeniagolubeva.wordpress.com.