Military Machines (How to Draw) 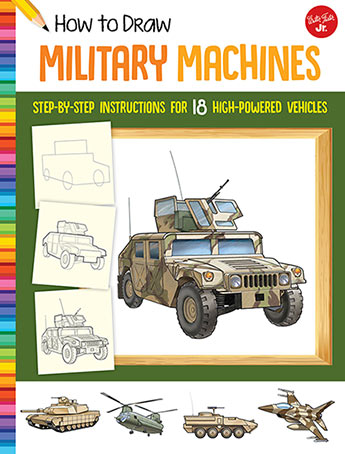 Young artists will revel in the variety of explosive drawing subjects featured in How to Draw Military Machines, from a twin-engine attack helicopter to a guided missile submarine, F-16 fighter jet, B-52 bomber, and more.

Learning to draw doesn't get more exciting than this! Young artists will revel in the variety of explosive drawing subjects featured in How to Draw Military Machines, including a twin-engine attack helicopter, a guided missile submarine, F-16 fighter jet, B-52 bomber, and more. Each drawing lesson starts with a basic shape, such as a rectangle or oval, and then progresses step by step to a realistic rendering of the featured subject, including a colour final. Engaging text tells a little bit about each subject, while fun facts about these impressive military machines educate children as they draw for an enjoyable, well-rounded artistic experience. Kids will enjoy the 32 pages of drawing instructions for a variety of super-powered vehicles, including:

Just start with the basic shapes and follow the illustrated examples-you'll be creating you own masterpieces in no time!
More books by this author More books in this series

An llustrator for more than 30 years, Tom La Padula has illustrated for national and international magazines, advertising agencies, and publishing houses. He has exhibited in numerous group shows throughout the country, and his paintings are included in many private collections. Tom holds a BFA from Parsons School of Design and earned his MFA from Syracuse University.