The Wolf Who Found a New Way to be a Leader 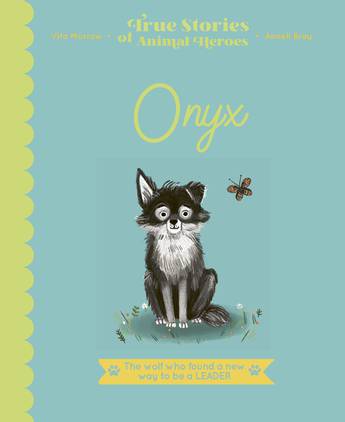 Onyx is a picture book story based on the real-life antics and behaviours of the wolves of Yellowstone National Park.

A debut picture book for the series Creatures Great and Small, the story of Onyx is based on the real-life antics and behaviours of the wolves of Yellowstone National Park.

When Onyx was a young pup in Yellowstone National Park, he was the runt of the litter. Although he was bullied by his siblings for being the smallest, Onyx knew that he could lead a pack better than anyone. As he grew up, he learned to resolve conflict, becoming a step-dad to another family of wolves who had lost their alpha. But it all changed when the toughest pup of the family partnered with a rival pack. One day, the elder wolf and his wild-card stepson met on a ridge. Normally, this would lead to violence, but instead, they met in a graceful and powerful bow. The wolves of Yellowstone flourished.

Moving illustrations from Anneli Bray will make you want to hug the page. Creatures Great and Small is a series of picture books based on real-life animal antics in which children discover that all creatures have important stories to tell us - no matter how great or small. These true stories feature animals as models of positive qualities like compassion, justice and using ones power for good. As children grow, they too will value and seek these qualities in their own stories and in the world around them.

Also debuting for the series is Fluffles, based on the koalas of the Australian outback - with even more heartwarming stories to come.
More books by this author More books in this series

Vita Murrow is an educator, an artist, a writer and a mum. Vita has a quirky sense of humour and an eye for the weird. When she was in 8th grade she was rejected from a special writers' retreat for kids. But that didn't stop her from pursuing her passion. Since then, Vita has been a teacher, a producer, a film maker, a program director and even a puppeteer. She currently works as a children's author reinventing old stories for a new generation and crafting wordless pictures books together with her husband Ethan Murrow. Their book The Whale was nominated for a CILIP Carnegie and Kate Greenaway Medal. She is also the author of two volumes of fairytales retold for a new generation: Power to the Princess and High-Five to the Hero. Vita loves working with other artists and writers and is always looking to share a chocolate chip cookie with someone.