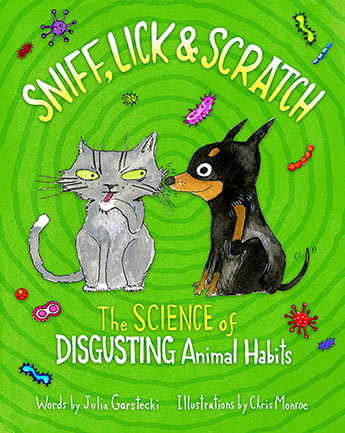 Sniff, Lick & Scratch! is the book parents and educators will turn to to explain the less majestic behaviors witnessed in the animal kingdom—and sneak in a little STEM learning while they're at it.

Do flies really puke on our food when we’re not looking? And why do dogs sniff each other’s behinds? The companion book to Pick, Spit & Scratch answers these and many of the other most pressing questions young readers have about the animal kingdom—specifically, do animals really do all those nasty things we hear about, and why?

As with the disgusting habits of humans, there’s a bit of science behind the strange things that animals do. Each spread describes a specific naughty-by-nature habit and provides multilayered reading opportunities in the form of one or two weird, disgusting facts that ratchet up the gross factor by connecting animal habits with relatable concepts. In many cases, the author even debunks commonly held myths about the animal habits described and, in the process, shows that these animal habits, though disgusting to us humans, are really matters of evolution and survival.

Have a question about a specific icky animal behavior? A glossary and index make Sniff, Lick & Scratch a great reference.

Kids will get a thrill out of exclaiming "Eww!" as they read this book. Parents will love that their children are reading and engaged in scientific inquiry.
More books by this author More books in this series


Julia Garstecki is an experienced teacher and author of dozens of nonfiction books for children, including Science in a Jar; Pick, Spit & Scratch; Sniff, Lick & Scratch; and Burp, Spit & Fart. She has also written several parenting pieces for various magazines. Publications include Thrive, Westchester Parent, and Mothering in the Middle. Her humor column “How Did I Get Here” appeared in the Jamestown Gazette.