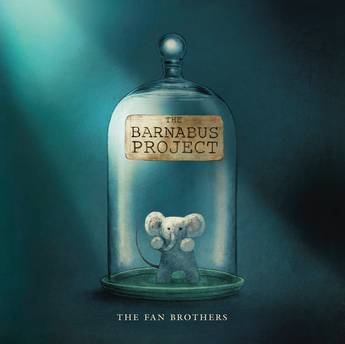 In a world built for Perfect Pets, Barnabus is a Failed Project, half mouse, half elephant, kept out of sight until his dreams of freedom lead him and his misfit friends on a perilous adventure. A stunning picture book from international bestsellers The Fan Brothers, joined by their brother Devin Fan.

'A stately, cathartic morality tale about freeing oneself from the tyranny of wanting to be perfect.' -The Financial Times
'ingeniously imaginative' - School Library Journal
'A heartfelt, timely allegory celebrating diversity, bravery, and solidarity.' - Kirkus

Deep underground beneath Perfect Pets, where children can buy genetically engineered "perfect" creatures, there is a secret lab. Barnabus and his friends live in this lab, but none of them is perfect. They are all Failed Projects.

Barnabus has never been outside his tiny bell jar, yet he dreams of one day seeing the world above ground that his pal Pip the cockroach has told him about: a world with green hills and trees, and buildings that reach all the way to the sky, lit with their own stars. But Barnabus may have to reach the outside world sooner than he thought, because the Green Rubber Suits are about to recycle all Failed Projects . . . and Barnabus doesn't want to be made into a fluffier pet with bigger eyes. He just wants to be himself. So he decides it's time for he and the others to escape. With his little trunk and a lot of cooperation and courage, Barnabus sets out to find freedom - and a place where he and his friends can finally be accepted for who they are.

This suspenseful, poignant and magical story about following your dreams and finding where you truly belong will draw readers into a surreal, lushly detailed world in which perfection really means being true to yourself and your friends.
More books by this author

ERIC FAN is an artist and writer who lives in Toronto, Canada. Born in Hawaii and raised in Toronto, he attended the Ontario College of Art and Design, where he studied illustration, sculpture and film. He has a passion for vintage bikes, clockwork contraptions and impossible dreams. His children's books include The Night Gardener, The Antlered Ship and Ocean Meets Sky. See more of his work at society6.com/opifan64 and on Facebook (Eric Fan Illustration).

TERRY FAN received his formal art training at Ontario College of Art and Design in Toronto, Canada. His work is a blend of traditional and contemporary techniques, using ink or graphite mixed with digital. He spends his days (and nights) creating magical paintings, portraits and prints. His children's books include The Night Gardener, The Antlered Ship and Ocean Meets Sky. Born in Illinois, he now lives in Toronto. Visit him online at krop.com/terryfan and society6.com/igo2cairo and on Facebook (Terry Fan Illustration).