The Bear, the Piano and Little Bear's Concert 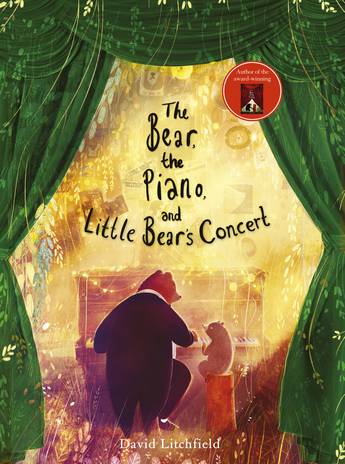 The final book in the award-winning, bestselling trilogy shows that while fame and fortune might be temporary, the best songs stay in your heart forever.

You probably remember the story of the bear who found the piano in the woods and grew up to become a huge star. He played his music in front of millions of adoring fans and all of his wildest dreams came true. But now, the audiences are smaller, the pianos less grand, and the applause is dying away. So Bear decides to retire. Back in the woods, he is sad that his dream is over but he soon has something to distract him: Little Bear! When Little Bear stumbles upon his piano in the woods, she can't believe it when her father says that no one wants to hear his music anymore. So she comes up with a plan to prove him wrong.

The final book in the award-winning, best-selling trilogy shows that while fame and fortune might be temporary, the best songs stay in your heart forever.
More books by this author

DAVID LITCHFIELD first started to draw when he was very young, creating Star Wars and Indiana Jones mash up comics for his older brother and sister. His first picture book with Frances Lincoln Children's Books, The Bear and the Piano, won the Waterstones Children's Book Prize (Illustrated Book Category) and became a best-seller in the UK and US. It was shortlisted for 8 other awards in the UK including the Sheffield Children's Book Award and the Independent Bookshop Week Award, and has sold in over 25 languages. The follow-up, The Bear, the Piano, the Dog and the Fiddle, published in 2018 to universal acclaim. David's other books include Grandad's Secret Giant and Lights on Cotton Rock. David lives in Bedford with his family.