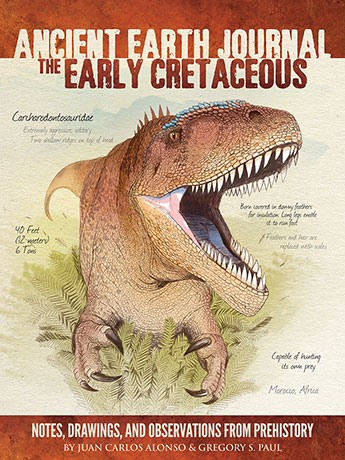 Written and illustrated in the style of a naturalist's notebook, The Early Cretaceous brings readers closer to prehistoric life than ever before.

Ancient Earth Journals, The Early Cretaceous brings readers closer to prehistoric life than ever before.

What it would be like to see a living, breathing dinosaur? Ancient Earth Journals, The Early Cretaceous brings readers closer to prehistoric life than ever before. By combining the latest paleontological findings with highly detailed, intimate drawings of wildlife from the Early Cretaceous, readers will look into the eyes of some of the most fascinating creatures to ever inhabit the earth. Written and illustrated in the style of a naturalist's notebook, the viewer will be given a first-hand account of what it is like to stand alongside everything from the first birds to flying dinosaurs to some of the largest creatures ever to walk the earth. Through detailed illustrations and descriptive narrative, readers will discover how some dinosaurs survived polar blizzards, while others were able to pump blood five stories high to reach their brains. While many books on prehistoric life lump dinosaurs into the general timeline of the Mesozoic Period, no book currently dissects plant and animal life during one specific period. This allows the book to explore wildlife seldom featured in publications, many of them recent discoveries. Ancient Earth Journals, The Early Cretaceous is backed by the research of one of paleontology's most acclaimed theorists, giving the book the most up to date scientific interpretation regarding animal behaviors, interactions, and recreations.
More books by this author More books in this series

Juan Carlos Alonso is a Cuban American graphic designer, creative director, and illustrator. He has over 30 years experience in the graphic design/illustration field. In 1992, he founded Alonso & Company, a creative boutique specializing in branding, design, and advertising. He has been working with clients of all sizes from Fortune 500 to local businesses and has forged strong relationships with companies including the NBA franchise The Miami Heat, Bacardi Rum, Ryder System, Pitney Bowes, and Capitol Records. Alonso & Company has attained international acclaim for work in advertising and graphic design. His passion for nature has taken him around the world from Australia to the Galapagos Islands to study animals. Along with his work in the graphic arts, he is also an accomplished wildlife sculptor focusing mostly on prehistoric animals.

Gregory S. Paul is an American freelance researcher, author, and illustrator who works in paleontology. He is best known for his work and research on theropod dinosaurs and his detailed illustrations, both live and skeletal. Professionally investigating and restoring dinosaurs for three decades, Paul received an on-screen credit as a dinosaur specialist on Jurassic Park and Discovery Channel's When Dinosaurs Roamed America and Dinosaur Planet. He is the author and illustrator of Predatory Dinosaurs of the World (1988), The Complete Illustrated Guide to Dinosaur Skeletons (1996), Dinosaurs of the Air (2001), The Princeton Field Guide To Dinosaurs (2010), Gregory S. Paul's Dinosaur Coffee Table Book (2010), and editor of The Scientific American Book of Dinosaurs (2000).