The Race to Space

From the Launch of Sputnik to the Moon Landing 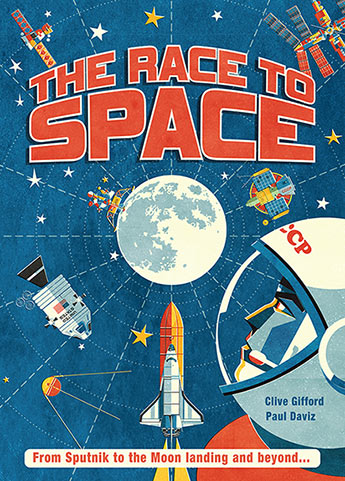 Discover the rivalry that gripped the world and sent man to the Moon! Celebrating 50 years since the Moon Landing, The Race to Space explores The USA and Soviet Unions competition to land on the moon, and looks at how their technological advances changed the world.

You know that man has walked on the Moon, but do you know the story of how he got there? With the 50th anniversary of the Moon Landing on 20th July 2019, this book celebrates the Space Race rivalry between the US and the Soviet Union. Readers will learn about the neck-and-neck race between the two superpowers, through an illustrated story of the rivalry that gripped the world. From Russia's first satellite, Sputnik, to Neil Armstrong planting a US a flag on the moon, discover the events that unfolded through amazing nostalgic illustrations and engaging text. Explore, too, how these two space agencies now work together, and how the monumental achievements of the space race have created world-changing technology that we all use and benefit from today.
More books by this author

Clive Gifford has travelled to more than 70 countries, has climbed rocket launch towers, ridden on robots and flown gliders. Hes had more than 200 books published and has received nominations for or won Royal Society, Blue Peter, Smithsonian among others.
Paul Daviz is an illustrator whose style is characterised by big, bold shapes, sweeping lines, strong colours, hints of texture, and plenty of fun. His influences include Soviet matchbox covers and 1970s cinema advertising. After studying graphic design and working as a storyboard visualizer for TV ads, packaging and print campaigns.