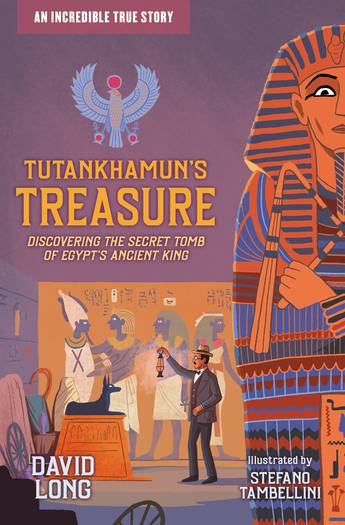 Uncover the incredible true story of Howard Carter's world-changing discovery in this fun and informative retelling of the secrets of Tutankhamun's tomb.

On 4 November 1922, a young Egyptian boy working on Howard Carter's archaeological dig in the Valley of the Kings stumbled across a strange piece of rock. On closer inspection it turned out to be a stone step that would lead Carter to a long-lost tomb - and to treasures beyond his wildest dreams.

The tomb belonged to boy pharaoh Tutankhamun and was packed full of priceless artefacts. It had been largely untouched for over 3,000 years and remains one of the most important archaeological discoveries of all time. But did the opening of the tomb trigger a deadly curse?

David Long's fact-filled account shows how Carter's amazing discoveries told us so much about life in Ancient Egypt.
More books by this author

David Long is a journalist and author of non-fiction for both adults and children. A writer since leaving university, his work has appeared in the Sunday Times and London's Evening Standard. His engaging non-fiction reflects his unquenchable thirst for fascinating stories from the past, and in 2017 his book Survivors won the Blue Peter Award for the best book with facts.