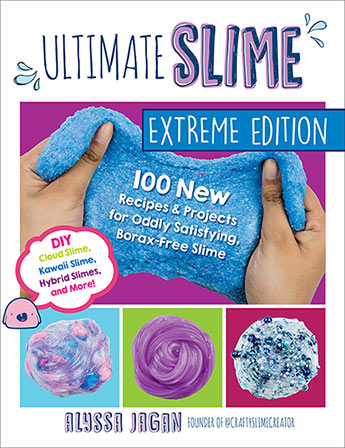 Ultimate Slime Extreme Edition is a collection of 100+ new recipes/ideas/projects for making and playing with slime from slime guru Alyssa J of @CraftySlimeCreator, author of Ultimate Slime.

Make the coolest slime ever with Ultimate Slime Extreme Edition!
More books by this author

Alyssa Jagan is Alyssa of@CraftySlimeCreator, which has been named one of the best slime accounts on Instagram. She is also the author of Ultimate Slime, which has been published in eleven languages, and the co-author of Study with Me, on how to use bullet journaling and time management techniques for successful studying, both published by Quarry Books. An 18-year-old college student and Toronto native, the popular Instagram slimer posts videos to her accounts every day, co-hosts the Slimey Sundays live podcast on Instagram with Erin Murphy of @SlimeonadeStand, and sells her products on her Etsy site, craftedbyalyssaj. In addition, Alyssa has been profiled by a variety of media outlets, including The New York Times, the Associated Press, The Globe and Mail, and the BBC.