You Can Draw Comic Book Characters (Just for Kids!) 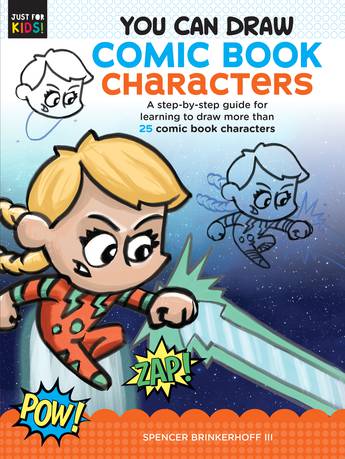 You Can Draw Comic Book Characters (Just for Kids) teaches drawing with simple steps and easy-to-find art tools, including techniques for designing your own comic book characters.

You Can Draw Comic Book Characters (Just for Kids) teaches drawing with simple steps and easy-to-find art tools, and includes techniques for designing your own comic book characters.
Learn to draw comic book characters with fun and easy, step-by-step drawing projects, and then design your own superheroes and villains.

You can draw more than 25 comic book characters by following the simple instructions, step by easy step. Once you are comfortable with the comic art style, move on to design your own heroes and villains. Tips and examples showing how to customize faces, hair, bodies, and action poses will have you drawing your own characters in no time. No complicated tools are needed. You can create comic art with just a pencil, pen, markers, and paper!

The book opens with helpful sections on tools and materials, essential drawing techniques, and color. This information ensures that you know the basics before getting started on the step-by-step projects that follow.
Get to know and draw more than 25 fun characters, including:
Jinx Tagget, whose discovery of the Star Stone allows her to shoot beams from her hands and use those same beams to fly
Tazu the Terror, whose greatest power is not his magical staff, but his ability to accurately predict the actions of his foes
Monsclara, a powerful but clumsy alien race from the planet Marumei
Battle Model KR-E2, a fully sentient robot that wants to wake up other KR robots
Alleyne, the smallest person from a planet full of giants, who accidentally ended up on Earth after being zapped through a warp tunnel
Cordy Seacliff, child genius, who created a jet-pack inspired by the old sci-fi movies he loves
Babsti, professor and expert Egyptologist who discovered the secrets the cat goddess Bastet, whose powers she is now able to yield
The Vortexer, an anti-hero consumed by jealousy who wears a technologically enhanced super suit with wrist-mounted vortex cannons
And many more!

Throughout the book, in between the drawing projects, are closer looks at how to create a complete comic book, including developing interesting heroes and villains, writing a story, adding dialog, and using panels. And included at the end of the book are templates to scan or photocopy and practice on over and over again. Drawing a character standing, running, flying, or zapping is easy with the included tips, techniques, and templates.

Written and illustrated by Spencer Brinkerhoff, You Can Draw Comic Book Characters (Just for Kids) is perfect for any comic book fan, regardless of artistic skill level.
More books by this author More books in this series

Spencer Brinkerhoff III started drawing and making art at an early age and has never stopped, completing a fine arts degree at Arizona State University and establishing a career as an artist. Spencers professional work has included creating some of the horse sculptures for the PF Chang's restaurants, animating an educational game for the World Health Organization, creating and starring in a video that won him Burt Reynolds' Trans Am, and creating Star Wars art for Lucasfilm Ltd. In addition to working on these licensed projects, he has also created a glasses-less 3-D image platform called ShadowBox Comics, an in-camera special effect keychain called LightStickFX, and a drawing system called DrawingIsSimple. Spencer lives in the greater Phoenix area of Arizona.