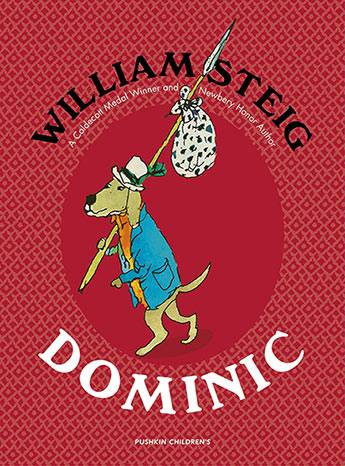 The delightful tale of a wandering good samaritan dog, with heartwarming illustrations by the author

Dear Friends,
I am leaving in rather a hurry to see more of the world, so I have no time to say goodbye to you individually. I embrace you all and sniff you with love. I don't know when I'll be back. But back I will be.
Dominic

It's time for a change, so Dominic packs his collection of hats and his piccolo and heads out, letting the world take him where it may. When Dominic encounters members of the Doomsday Gang, he easily foils their attempt to rob him. Legend of his victory quickly spreads, and each new friend Dominic meets tells him a story of their own less-fortunate meeting with the villains, and asks for help from the heroic dog. But can one lone dog bring down an entire band of hooligans?
More books by this author

William Steig (1907-2003) was an American cartoonist, sculptor and illustrator and writer of children's books. He was also the creator of Shrek!, which inspired the film series of the same name. He was the U.S. nominee for both of the biennial international Hans Christian Andersen Awards, as a children's book illustrator in 1982 and a writer in 1988.