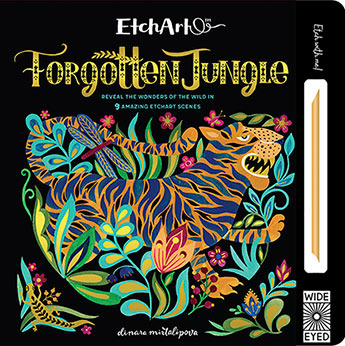 Discover a mystical jungle with your stylus as you etch your own folk-art in these innovative activity books with scratchable ink.

Explore a mystical jungle as you etch your own folk-art in these activity books that take you on a journey through nature. Hiding beneath panels of scratchable ink, birds, beetles and other beasts lie, waiting to be uncovered using your wooden stylus.
More books by this author More books in this series

AMANDA WOOD began her career in illustration at the Natural History Museum and went on to be the founding Editor and Publisher of Templar for more than 30 years. In her time there, she published and nurtured numerous Greenaway winners, and edited and wrote groundbreaking series such as The Ologies, which have sold over 19 million-copies worldwide. Today she writes and runs her own small press from her home in Surrey.Mike Jolley has worked as an Art Director in children’s books for over 25 years. He also sells artwork made from found objects, under the name ‘Box 2’. It was during one of his many junk shop visits that the idea of using midcentury school information charts for Curiositree first took shape. He lives on a cliff overlooking the English Channel.Dinara Mirtalipova is a self- taught illustrator/designer. Born and raised in Tashkent, Uzbekistan, she eventually landed in snowy Ohio. Raised in Soviet Uzbek culture, she inhabited Uzbek/Russian folklore that still influences her work. For a long time Dinara has been among illustrators and designers at American Greetings. She left her creative role at American Greetings in February 2014 to pursue her ever growing freelance career and to start a new chapter as a free spirit independent designer. Currently Dinara works from her home studio in Sagamore Hills, OH.