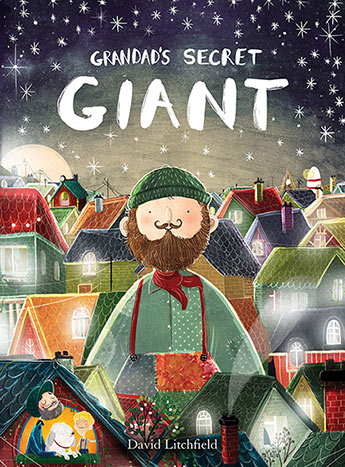 A GIANT story of belonging and friendship from David Litchfield, author of the prize winning The Bear and the Piano.

He has hands the size of tables, Grandad said, legs as long as drainpipes and feet as big as rowing boats. Do you know who I mean?

Yes, sighed Billy. The Secret Giant. But he's not real!

Billy doesn't believe his Grandad when he tells him there's a giant living in his town, doing good deeds for everyone. He knows that a giant is too big to keep himself hidden. And why would he WANT to keep himself a secret? But as time goes on, Billy learns that some secrets are too BIG to stay secret for long...

A GIANT story of belonging and friendship from David Litchfield, author of the beautifully illustrated The Bear and the Piano.
More books by this author

DAVID LITCHFIELD first started to draw when he was very young, creating Star Wars and Indiana Jones 'mash up' comics for his older brother and sister. Since then David's work has appeared in magazines, newspapers, books and on T-shirts. He has also exhibited his illustrations in both solo and group shows in the U.K, Europe and America. His first picture book,The Bear and the Piano, won the Waterstones Prize and has sold in 12 languages. David lives in Bedford with his family.