If You See a Lion 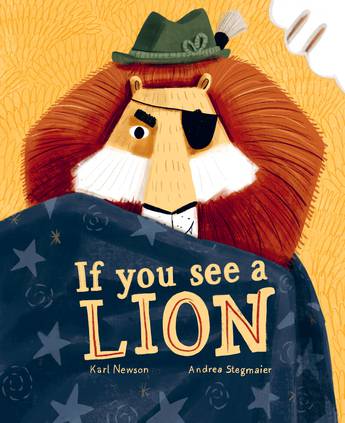 A devious and poorly disguised Lion tells the reader about a story that used to be in this book until a lion ate it all. While monologuing, a brave rabbit tries to confront him. Can one brave little rabbit save all the storybook characters?

Once upon a time, there was a story in this book. But a lion ate it all.

Narrated by a tall, handsome and ever-so-dashing lion, dressed head to toe in fancy dress, this is a hilarious story of how a greedy lion ate all the picture book characters and lies about it. Problem is, he just cant resist boasting about it! The lion, while disguised, beckons the reader closer to find the culprit while a rabbit hides in the pages, shouting out warnings until he bravely confronts the lion about his crime. Will he win? And will Lion ever learn his lesson?

A hilarious story with plenty of opportunities for group participation.
More books by this author

Karl Newson is a children's author and illustrator. He spent his younger days making dens, roaming barley fields and playing up the prak (park) in Norwich, Norfolk, but he now lives in London, where he mostly just eats biscuits. He enjoys writing and drawing and listening to music from the 1960s. Karl is the creator of The Mudwaffler - a small, forest dwelling bear who reviews books. Catch him at www.Mudwaffler.com!