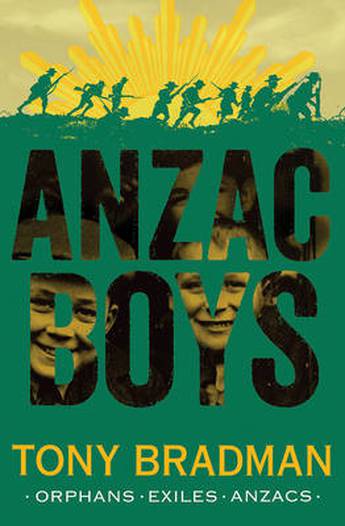 A powerful and moving World War One story about ANZAC soldiers and the disaster of the Gallipoli landing.

Powerful and moving World War One story about ANZAC soldiers and the disaster of the Gallipoli landing.

Bert and his little brother Frank are orphans. Determined to stay together, tragedy strikes when they are transported out of the country to serve as cheap labour in the British colonies and end up separated; Bert to Australia and Frank to New Zealand. Years pass. As the Great War dawns in Europe, the ANZACs send their soldiers to storm Gallipoli, but can the battlefield also serve as a reunion for the two brothers? A gripping historical tale based on a tragic episode of World War One.
More books by this author More books in this series

Tony Bradman began in magazine publishing and moved into books with the popular Dilly the Dinosaur series. Tony has now sold more than 2 million titles worldwide and is one of the most popular children's authors writing today. His recent novel Viking Boy is an action-packed blend of historical adventure and fantasy that has enthralled younger readers. Tony is also a respected anthologist having edited over 30 anthologies, and his brand new Stories of World War One is proving to be a hit.