Ways Of The Doomed

The Passport to Freedom is Truth 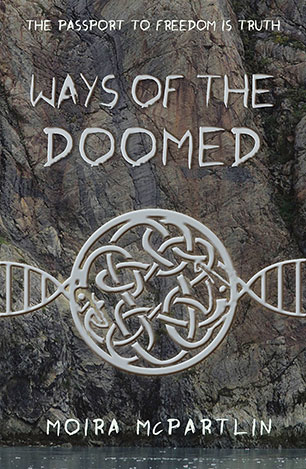 It's the year 2089 and everything is altered. The revolutions of the early 21st century have created a world divided - between the Privileged few and the Native (Celtic)

Sorlie is enjoying a typical carefree Privileged teenage life until it is smashed apart by the cruel death of his parents and he is spirited away to live with his ice-cold grandfather at a mysterious island penal colony.
Sorlie's discovery that the captives are being genetically altered to remove all trace of their Native origins triggers a chain of shocking events that reveal his grandfather's terrible secrets and, ultimately, the truth about himself.
More books by this author More books in this series

Moira McPartlin made a big impact with her debut novel The Incomers, which tells the tale of a West African woman moving to a small town in 1960s Scotland. It was shortlisted for the Saltire Society First Book of the Year Award and was a critical success. Moira is also a prolific writer of short stories and poetry, which have been published in a wide variety of literary magazines.