The Rise, Fall, and Rebirth of an American Whiskey 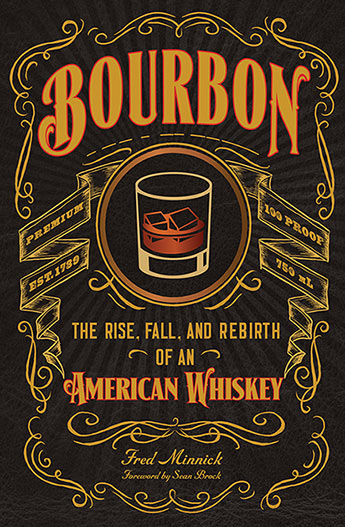 Bourbon: An Illustrated Rise, Fall, and Rebirth of an American Whiskey, by award-winning and best-selling author Fred Minnick, profiles America's unique history of bourbon, bourbon distillers, and bourbon drinkers, and it answers the question everyone wants to know: Who invented this most American of spirits?

Once and for all, America learns the likely inventor of its beloved bourbon.

Bourbon transcends mere liquor. This potent, amber-colored drink is deeply engrained in American culture and tangled in American history. From the early days of moonshine to the myriad distilleries that proliferate around the country today, bourbon has come to symbolize American spirits. In Bourbon: An Illustrated Rise, Fall, and Rebirth of an American Whiskey, award-winning whiskey author Fred Minnick lays out the historical connection between America and bourbon, from Congress passing whiskey-protection laws to consumers standing in long lines just for a glimpse of a rare bottle of Pappy Van Winkle.

Bourbon: An Illustrated Rise, Fall, and Rebirth of an American Whiskey begins in the 1700s with Irish, Scottish, and French settlers setting up stills and making distilled spirits in the New World. Filled with more than 100 illustrations and photos, Bourbon unfolds as a sort of loose mystery as Minnick explores who most likely invented the sweet corn liquor we now know as bourbon. Minnick studies the men who've been championed as the inventors over time, from Daniel Boone to Baptist minister Elijah Craig and, based on his new research, definitively answers who most likely invented bourbon. We'll drink to that!
More books by this author

Wall Street Journal best-selling author Fred Minnick wrote the award-winning Whiskey Women: The Untold Story of How Women Saved Bourbon, Scotch and Irish Whiskey. Minnick writes about whiskey for Covey Rise, Whisky Advocate, and Whisky magazine. He is the bourbon authority for the Kentucky Derby Museum and regularly appears in the mainstream media, including CBS This Morning, Esquire, Forbes, and NPR.