50 Recipes from Simple to Sassy 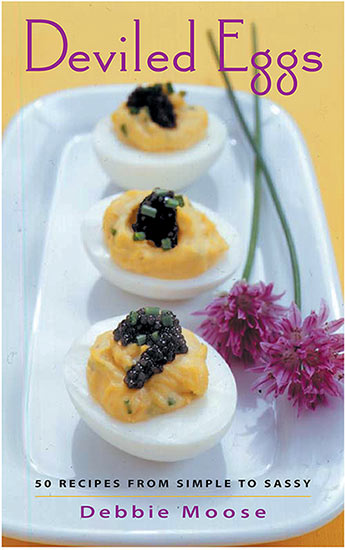 Download cover
Availability: Not available to order from this website, please try another retailer
Some say the devils you know are better than the devils you don’t. Well, in these pages there are plenty of both, and all are wickedly delicious. Deviled eggs, a perennial favorite of potluck suppers and picnics, a party food that is nearly perfect in its simplicity and speed of preparation, are basking in a long-awaited renaissance.  Technically, deviled eggs should be revved up with a little something spicy, but these recipes show that they don’t have to be hot to be fabulous. Flavors can range from light to elegant to gutsy to fiery. Fillings can be as smooth as silk or chock full and chunky.  If you’re a purist, take a trip down memory lane with the best of the classics, infused with fresh herbs and mild mustards. If you’re looking for something different and fun, try out combos including blue cheese and bacon or pepperoni and parmesan. Or maybe you want to impress your friends with your international palate by including the flavors of Indian chutney and curry, Italian sun-dried tomatoes and pesto, or Greek feta and olives. And if you love to go for the burn, well, welcome to perdition, where eggs stuffed with salsas or chilies, wasabi or jerk seasoning await the brave.  And if you’re worried about the devil in the details, fear not: here you will find answers to such timeless questions as how to perfectly hard-cook eggs, how to peel off the shell without demolishing the white, and how to present your creations so they look festive and don’t go rolling off the plate when you serve them.

More books by this author More books in this series

Debbie Moose is a freelance writer, cookbook author, and teacher of writing and cooking classes. Her monthly column “Sunday Dinner” has appeared in the Raleigh News & Observer since 1998. Her work has also appeared in Southern Living, and one of her essays was selected for the inaugural edition of Cornbread Nation 1: The Best of Southern Food Writing, compiled by the Southern Foodways Alliance. She is a former food editor of the Raleigh News & Observer. Moose grew up in Winston-Salem, North Carolina, with parents who tended such a large vegetable garden that they never had to buy canned vegetables or tomato sauce. There, Moose learned about the wonderful flavor of fresh ingredients. She earned her degree in journalism from The University of North Carolina and began working as a reporter, first for the Salisbury Post and then for the News & Observer. She combined her interests in food and writing as the editor of the News & Observer’s food section for seven years, during which time it was twice named best section in the U.S. for its circulation category by the Association of Food Journalists. Moose is now a national-award-winning freelance writer. She has also been recognized for her volunteer work at a Raleigh agency that assists victims of domestic violence, where she is a counselor. She has taught several cooking classes and writing workshops, and volunteers with a literacy organization to teach English as a second language. An ardent college basketball fan since childhood, Moose lives with her husband in Raleigh, North Carolina. Visit Debbie’s blog, Moose Munchies at DebbieMoose.com.