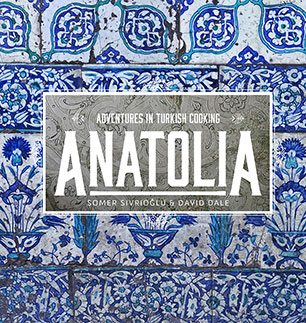 Re-imagining the traditions of Turkish cuisine in images, stories and delicious recipes.

Anatolia is a richly illustrated, entertaining and informative exploration of the regional cooking culture of Turkey. Turkish-born chef Somer Sivrioglu and co-author David Dale re-imagine the traditions of Turkish cooking, presenting recipes ranging from the grand banquets of the Ottoman empire to the spicy snacks of Istanbul's street stalls. In doing so they explain their take on the classics and reveal the surrounding rituals, myths, jokes and folk wisdom of both the old and new Turkey.

More than 150 dishes are featured, and images of the recipes are complemented by specially commissioned photographs shot on location in Turkey. Feature spreads on local Turkish chefs and producers and their specialities add a fascinating layer of interest and flavour.
More books by this author

Somer Sivrioglu grew up in Instanbul and moved to Sydney when he was twenty-five. He now runs the extremely popular Efendy restaurant in Balmain, where he draws on a multitude of cultural influences to recreate the food traditions of his homeland.

David Dale is an Australian political journalist, commentator on popular culture, and food and travel writer. In his earlier books, David analysed how Italian cooking charmed the world. He's convinced that 'Turkish is going to be the next international phenomenon and Somer the next Ottolenghi'.