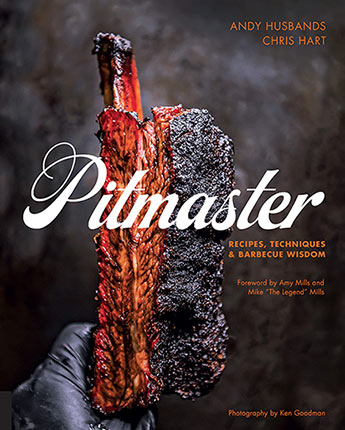 Pitmaster is the definitive guide to becoming a barbecue aficionado and top-shelf cook from renowned chefs Andy Husbands and Chris Hart.

Barbecue is more than a great way to cook a tasty dinner. For a true pitmaster, barbecue is a way of life. There is no single path to becoming a pitmaster. Barbecue lovers are equally inspired by restaurants with a commitment to regional traditions, competition barbecue champions, families with a multi-generational tradition of roasting whole hogs, and even amateur backyard fanatics.

Pitmaster is the definitive guide to becoming a barbecue aficionado and top-shelf cook, whether you're new to the grill or a seasoned vet. Recipes begin with basics such as cooking chicken thighs on a grill and expand to roasting whole hogs over hickory coals. The cornerstone of all successful barbecue recipes is proper smoker operation, and instructional photos and tutorials for using all classic smoker types are featured as well.

Each chapter features a guest pitmaster who is an expert in their given region or style of barbecue cooking. Chapters on backyard cooking and tailgating offer the basics of becoming a successful barbecue cook. Spotlights on specific regional barbecue styles, such as Texas, Kansas City, and the Carolinas, set the stage for more advanced barbecue techniques and recipes, such as Butterfly Pork Butt Burnt Ends and Memphis-Style Baby Back Ribs. Regional side dishes, tasty cocktails for a crowd, and simple desserts round out each chapter's offerings.
More books by this author

Andy Husbands, the award-winning chef/owner of Tremont 647 in Boston, has been enticing patrons with his adventurous American cuisine at the South End neighborhood restaurant and bar for well over a decade. A James Beard Best Chef semi-finalist, Andy competed in the sixth season of Fox Television Network's Hell's Kitchen with Gordon Ramsay.Andy and Chris are the authors of Wicked Good Barbecue, Wicked Good Burgers, and Grill to Perfection.Chris Hart, winner of the Jack Daniel Invitational World Championship in 2009, has dominated the competition BBQ circuit for the past 10 years with his team, iQUE. The team was the first group of northerners in barbecue history to win a World Championship. Chris spends his days developing software, but his passion for cooking barbecue has him following the competition BBQ trail on weekends, pitting his talents against the best pitmasters in the U.S. In 2010, Chris cooked an elaborate barbecue tasting menu at the James Beard House in NYC.