Delicious patisserie made with natural ingredients and free from gluten, dairy and refined sugar 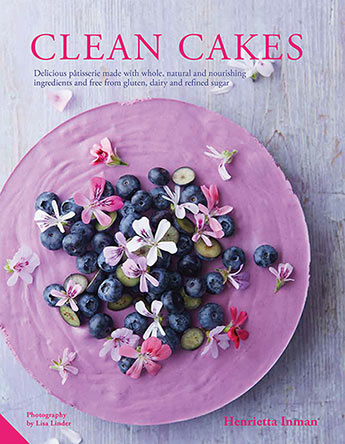 Clean Cakes is the ultimate cookbook for anyone who enjoys baking as well as experimenting with new and alternative ingredients.

Clean Cakes is the ultimate cookbook for anyone who enjoys baking as well as experimenting with new and alternative ingredients. It provides a wealth of ideas for cooking everything from spectacular cakes, energy-boosting muffins and wholesome loaves to stunning raw desserts and scrumptious tarts and pies, with distinctive flavour combinations and original twists on established classics. It will prove invaluable for anyone who for health or lifestyle reasons wants to eliminate gluten, dairy or refined sugar from their diet but who still wants to satisfy their sweet tooth and create their own nutritious guilt-free masterpieces.

Henrietta Inman embraces nutritious whole food ingredients that are unprocessed, unrefined, natural, seasonal and local wherever possible. The first section shows how to stock your Clean Cakes larder, as well as including foundation recipes such as cashew cream, nut butters and homemade jams. Next come over 75 beautifully photographed recipes, from rich chocolate brownies, a show-stopping courgette, basil, lime and pistachio layer cake and raw desserts to five grain omega mix granola bars, spectacular fruit pies and enticing savoury tarts. These recipes are for everyone and show that cooking healthily doesn.t have to mean compromising on flavour.
More books by this author

HENRIETTA INMAN graduated with a distinction in the Professional Patisserie Scholarship at Westminster Kingsway College, London, before working as a pastry chef in a number of award-winning kitchens including the Michelin-starred Lanesborough Hotel, London.

In September 2013 Henrietta started the popular Henrietta Inman Patissiere, in Suffolk, UK. She does baking demonstrations, runs cookery classes and sells at farmers' markets and festivals as well as accepting private commissions. Her recipes have been featured in the Sunday Telegraph Stella Magazine and she has a popular website, www.henscleancakes.com, and blog, Hen's Clean Cakes.

Henrietta has collaborated with the unique sports-luxe brand, Laurie Nouchka, and new fitness trend, Voga, and will be working with them both again this year when Laurie Nouchka's sport luxe-clothing line is launched by Hip and Healthy.