A sophisticated trip down memory lane 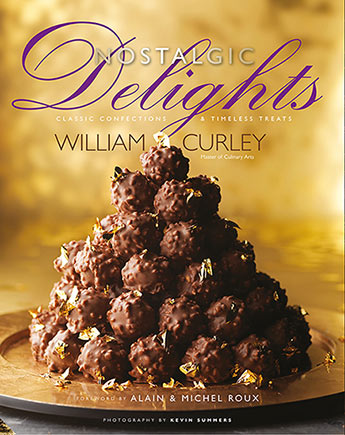 In Nostalgic Delights, award-winning chocolatier William Curley aims to recreate childhood memories and times gone, taking classic recipes and modernising them with his own, unique creations.

Creating top-quality confectionary, cakes and patisserie is often seen as something only a trained professional can do, however with patisserie equipment now easily accessible to all, William hopes to produce a book where the reader can create at home and evoke their own nostalgic memories.

William's ethos centres around using the best ingredients and techniques available, while making it accessible to the home cook. Some recipes are simple to make with minimal ingredients, such as the Hazelnut Rocher and Bakewell tarts.

During the 70s and 80s, the convenience food market boomed, and changed the image of many iconic dishes. William recreates the decadence once again in many of these recipes, such as a Black Forest Gateau or Blackcurrant Cheesecake.

The book also touches on the comfort food that most of us grew up with, whether it be a Jammy Dodger, an Arctic Roll, or a Banana Split, William takes these to a whole other level!
More books by this author

Brought up in Fife, WILLIAM CURLEY's career began with an apprenticeship at Gleneagles, followed by 6 years at numerous Michelin-starred establishments, working with respected chefs including Pierre Koffman at La Tante Claire, Raymond Blanc at Le Manoir aux Quat' Saisons and Marco Pierre White at The Restaurant. He then became Chef Patissier at The Savoy Hotel under Anton Edelman, as Chief Patissier leading a team of 21 pastry chefs.

In 2004, he opened his first boutique in Richmond, followed by the opening of his equally successful Belgravia Boutique. After an increasing demand for his chocolate and patisserie creations, William Curley chocolate and patisserie concessions were opened in world-renowned department store Harrods in July 2011. They also create bespoke patisserie to accompany Afternoon Teas at some of London's top establishments.